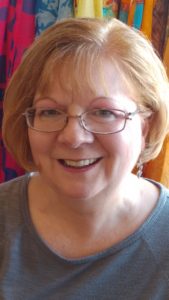 Catherine Babcock-Rec was born February 25, 1956, at 2:38 a.m. in Houston, Texas. Catherine — known as Cathy — began on IAA’s Board as Secretary/Treasurer and now holds the title of Treasurer/CFO.

Cathy’s interest in the Houston’s Pacifica Radio Station in high school took her early education into the technical aspects of broadcasting. She got her First Class FCC license after graduation from Elkins Institute for Radio Broadcasters, and at 19 she went to work for Southwestern Bell as a Communications Technician. In 1984, she transferred to AT&T and maintained the high-frequency radio equipment. During the massive cut-back in personnel, she was “laid-off” in 1990, after 15+ years of service. Because of her excellent work as a liaison between AT&T and NASA, providing backup microwave broadcast links for televised portions of shuttle missions, she went to work at NASA-Houston the following Monday (after her last day at AT&T on Friday) in Voice Control within Mission Control. She worked a number of significant shuttle missions.

In 1994, she went to the University of Houston to acquire her technical engineering degree, where she became a lifetime member of Tau Alpha Pi and Vice President of IEEE. To supplement her income while she was a student, she worked at the local PBS television station as Assistant Manager of the Computer Services Department.

She relocated to the Shenandoah Valley, Virginia, in the fall of 1997 and worked for an area TV station as News Producer until 2002. At that time, a radio station was being established and she was asked to join them. There, she did everything from computerizing the station to serving as producer and as office manager, until the station was dissolved in 2006.

At that time, Pluto hit her ascendant and she brought her varied abilities and talents to IAA, an organization she is attached to by birth. She is the eldest daughter of Ena Stanley, President. She has made the school’s QuickBooks proficient and efficient; she has initiated a number of marketing and advertising booklets, CDs, catalogs, and facsimiles; and she has brought a higher level of organization and professionalism to the general office procedures.

During that time she also worked for a Harrisonburg PC repair company, but when the owner died in 2012, she opened her own PC and IT repair business in Shenandoah County. She is now a small business owner and on two boards of non-profit corporations as the Treasurer for IAA and the Rouss Center for the Arts.