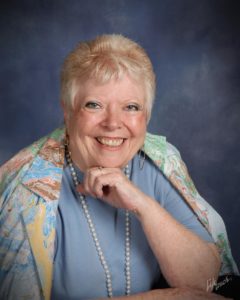 Ena Stanley is the recipient of the 2012 Marion D. March Regulus Award for Education and was the first person to receive NCGR’s Level IV Certification in the field of education. She started her personal study of astrology in 1968 and began her formal study in the late 1970s with Beverly Farrell, PMAFA. Her education went on through most of the 1980s with, Ziporah Dobyns and Joan Negus.

In January of 1986, Ena began her career as a teacher and compiled a curriculum that accommodated NCGR’s certification exams. She taught at Southern Oregon State College, 1986-1989; College of the Mainland (Galveston County, Texas), 1990-1993; Gulf Coast Chapter – NCGR, 1994-1997; CALCampus, an exclusively online community college, January 1994 – Spring, 1997. In April of 1997, she and Ed Perrone created and opened the first cyberspatial astrological school, and the Online College of Astrology was born.

In Spring of 2008, Online College of Astrology, Inc., was dissolved, and on March 31, 2008, at 12 noon (Richmond, Virginia), OCA, Corp., became a 501(c)(3) corporation. A contest was held that fall to select a newer and more appropriate name for our school. The International Academy of Astrology was chosen.

The International Academy of Astrology is a vocational school dedicated to offering the serious astrology student a comprehensive education. The Academy is well respected in the astrological community.

Ena is President of the Board of Directors, as well as filling the position of CEO.